Where do you live?

Make sure you’re making the most of tax advantages

DON’T LET THE MARKETING SCARE YOU

Scare Tactics
Your fear of taxes is an easy target for fear marketing. You have heard the threat “you will pay away most of your retirement savings in taxes” or the promise of a “tax-free retirement.”

Why does this work?
Because you hate taxes almost as much as sneakers that aren’t white, teenage trick-or-treaters, and Costco cart traffic jams on sample day.

Your tax fear might also be your retirement Achilles’ heel. The biggest retirement mistakes are fear-based decisions.

Taxes are complicated
There is no easy way around that.
If this drawing makes sense to you, you’re done reading. 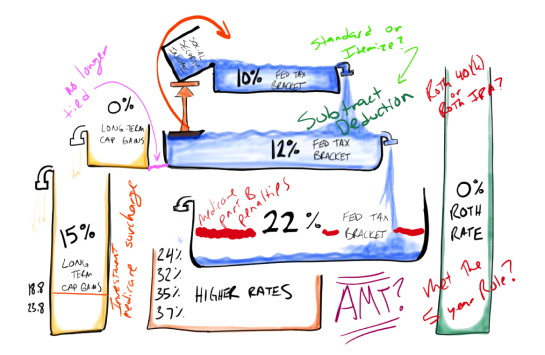 No surprise, we are all still here. There are some straightforward guidelines which will help retirees navigate the tax minefield.

WHAT ARE MY ENROLLMENT TIMELINES?

HOW SHOULD SPOUSES PLAN FOR SOCIAL SECURITY?

SHOULD I TAKE SOCIAL SECURITY NOW, OR WAIT?

SHOULD I PULL FROM SOCIAL SECURITY OR MY 401(k)?

Guideline 1 : You can’t avoid taxes completely
Every definitive financial planning statement has an exception. You CAN avoid taxes entirely if you have no assets, no income, and live on Social Security alone. If you are here, that isn’t you.

Then what is “tax-free retirement”?

A white unicorn, a super-cute idea that doesn’t exist. What is the pitch? Withdraw from your IRA and pay taxes now, put the proceeds in an expensive life insurance policy, and then borrow from the policy until you die and let the life insurance pay it back. The agent makes a hefty commission and the insurance company capitalizes on using your assets for decades. Why might a retiree pick this strategy? To pay taxes now in exchange for tax-free growth. In my world, that is called a Roth conversion. The difference is that no agent gets paid a commission to do a Roth conversion. Life insurance is not bad, in fact, most of the work force needs it. Utilize life insurance to help protect the lives of those you leave behind — not manage income tax liability.

Normally you would be penalized for taking withdrawals from an IRA before the age of 59½; however, this penalty does not apply to inherited IRAs. This makes sense. It would be cruel to require a distribution and then penalize you for it. I can hear a few of my clients’ voices muttering “I wouldn’t put it past the government …”

Guideline 2 : Your retirement account is really a partnership with the IRS
The IRS and you are in it together. The IRS has an equity stake in your retirement account of somewhere between 10 percent and 30 percent. They get to make all the rules and you get to operate the company. You get to choose the IRS’ equity ownership based on your patience. The quicker you want out of your joint venture, the higher the IRS’ share.

Here is how it sounds in real life:

This is what it really means:

What it really means:

In both these cases the IRS (plus state income tax) was about a 30 percent partner in your retirement account. Retirees forget to account for the fact that any withdrawal is included in your taxable income (even the money withheld for taxes!).

Answer:
Through patience and knowing the lines.

The sections of your income are taxed at different rates. The rate starts small to help low-income earners. In line with a politician’s logic, the rates climb inconsistently and at irregular intervals. The most expensive tax rate you experience is on the last dollar you earn and is called your marginal tax bracket. Think of buckets lined up underneath each other catching any overflowing water.

When possible, stop taking income before you spill over to the next bucket.

If you have $30,000 of headroom in the 12 percent bracket and an $80,000 mortgage you have been itching to pay off, split up the withdrawals over three years and avoid the 22 percent bracket.

As a couple, the 10 percent bracket is about $20,000 tall. You also get to use your deduction (itemized or standard) to reduce your income. You could easily have $44,000 in income and pay no greater than 10 percent fed tax on any income.

Tax rates can change. In 2025, the personal tax code is set to revert to 10 percent, 15 percent, and 25 percent for the first three brackets. Who knows what politicians will do? However, 15 percent later is still better than 22 percent to 37 percent now. 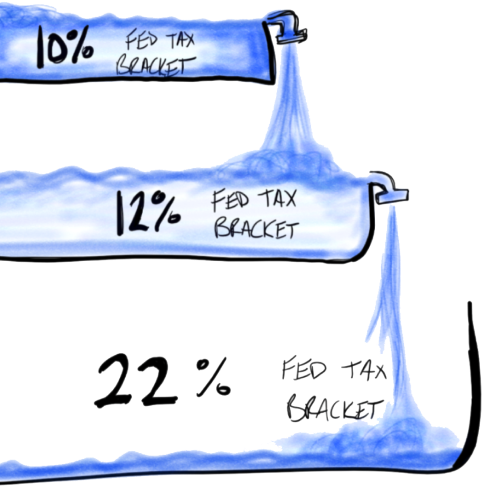 Guideline 3 : Beware of the Social Security tax accelerator
Those with very low income typically do not pay any tax on their Social Security income. Thank goodness for this. The average Social Security monthly payment is about $1,400. Taking some of that would be robbery.

Social Security income was supposed to be tax free, however, things change. How should Congress decide when someone has enough means to pay tax on Social Security? In true tax-code fashion, the answer is a three-step sum, then a two- part test with the lessor of two numbers being your taxable percentage. Easy, right?

The formula means that it is a gradual scale rather than a cliff. As you have more income, more of your Social Security pours over to a maximum of 85 percent being included.

Adding $30,000 of additional Adjusted Gross Income (AGI) pushed the taxable portion of his Social Security from 10 percent to 70 percent. Take a look: 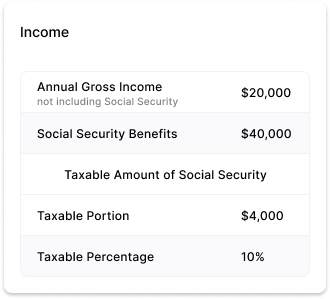 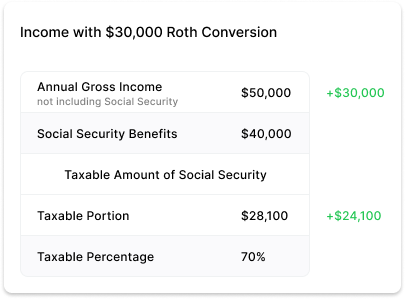 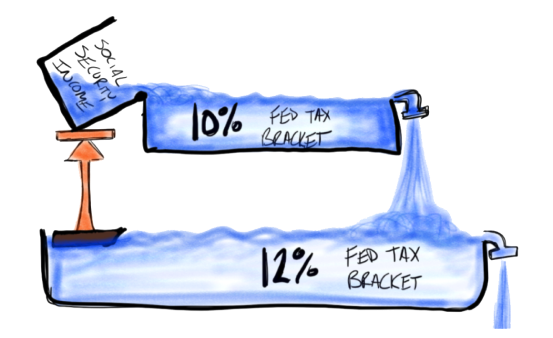 Guideline 3 : Beware of the Social Security tax accelerator
For those of you who are lucky (or strategic) enough to have filled all three tax categories, you have flexibility.

One of our engineering clients calls this “degrees of freedom.” You have the ability to withdraw from an IRA at income tax rates, sell non-retirement assets at capital gain rates, and/or withdraw from Roth at a zero percent rate.

Here is an example of someone being able to spend around $150,000 per year in retirement at a federal tax rate of roughly 8 percent. It is not magic, it is strategic planning to allow for “degrees of freedom. In other words, the flexibility to behave in different ways. 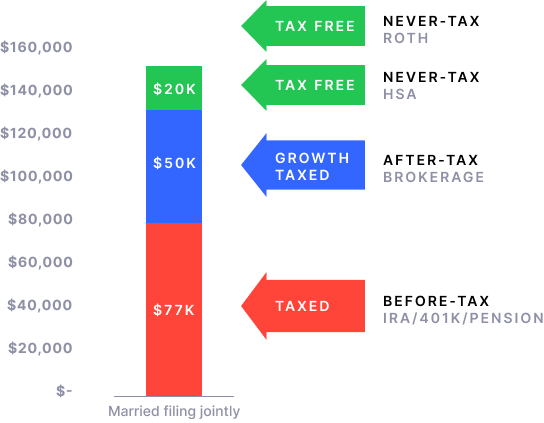 Call it “degrees of freedom,” call it “marginal tax-bracket management,” or just call it “smart thinking.” It doesn’t matter what you call it, being aware of taxes is much better than being afraid of taxes.